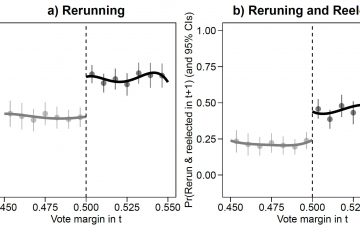 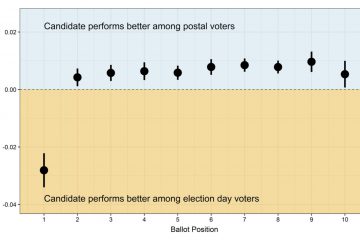 Various studies demonstrate that candidates at the top of the party list have a strong advantage in preferential voting systems, particularly under open-list PR. Such ballot position effects can be explained by voters’ tendency to rely on easily available information shortcuts when selecting a candidate. In this paper, we argue that the strength of ballot position effects depends on the context of how voters cast their vote. Specifically, we argue that postal voters are less likely to rely on the ballot position cue compared to voters who vote on election day for two reasons. First, postal voters might be more politically interested. Second, postal voters have more time to assess additional information about the candidates. The hypothesis is tested by analyzing newly collected data from two open-list PR elections in the German federal state of Hamburg. The results confirm the theoretical expectations: Ballot position effects are substantively weaker among postal voters. Additional analyses suggest that differences in the political interest between postal voters and election day voters are unlikely to fully explain these results. These findings advance our understanding of ballot position effects and voters’ use of information shortcuts more generally.